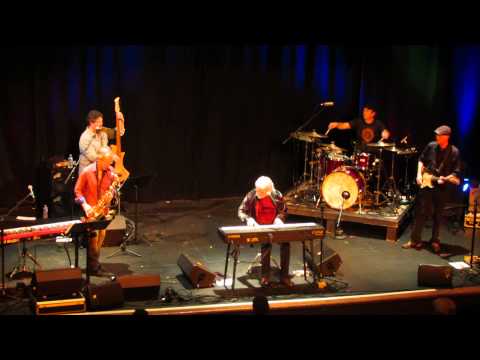 It’s time to rock the holidays!!! Chuck Leavell recorded his Christmas album “What’s in That Bag?” back in 1997 during breaks from the Rolling Stones ‘Bridges to Babylon’ tour.  The album was released in 1998, the same year the Rolling Stones released their live album “No Security”.  “What’s in the Bag” began as a Christmas card from Chuck to his friends and family. It was first recorded in 1996 at a small studio in Georgia using local musicians. Capricorn founder, Phil Walden received a copy of the ‘Christmas card’ and offered to bring it to the public. Chuck’s buddy Johnny Sandlin re-recorded the tracks a year later bringing in Bill Stewart and Rodger Hawkins on drums, David Hood on bass, Kelvin Holly on guitar, Scott Boyer on guitar and vocals.

The album includes traditional Christmas songs such as “Greensleeves”,”We Three Kings,” and “Oh Holy Night”, as well as original material written by Chuck and others.

The fourth track on the album, “ Joy Boogie” is a joyful and explosive boogie-woogie version of the traditional Christmas classic, “Joy to the World”. At irocku, we turned this joyous piano celebration into a piano lesson; which as expected, is our most popular download of the season. Chuck uses G blues licks , thirds and sixths over a smoking boogie woogie bassline.  It’s got rock, blues,  boogie woogie, and a bit of Vince Guaraldi all wrapped into one. Have fun with it!

“irocku is the greatest thing since sliced bread for me. I've been working on all of the lessons for all of the songs that have been posted thus far. Keep on rockin'!” John A
Thanks for the excellent piano tutorials, I enjoy them immensely. Steve R