There aren’t a lot songs that have been covered by as many different artists representing such a variety of musical genres as “Rockin’ Pneumonia and the Boogie Woogie Flu”. It’s easy to lose sight that this song was originally recorded over 60 years ago, back in 1957, by the little known piano great, Huey ‘Piano’ Smith. Huey ‘Piano’ Smith was born in New Orleans, Lousiana and was influenced by both the boogie woogie stylists and the other great New Orleans’ piano players of his era; namely Professor Longhair and Fats Domino. Huey ‘Piano’ Smith’s version of “Rockin’ Pneumonia and the Boogie Woogie Flu” is a fusion of a boogie woogie bounce and a New Orleans syncopated melody line.  It has become a New Orleans anthem and has made it to the list of Top Rock Piano Songs of all time. 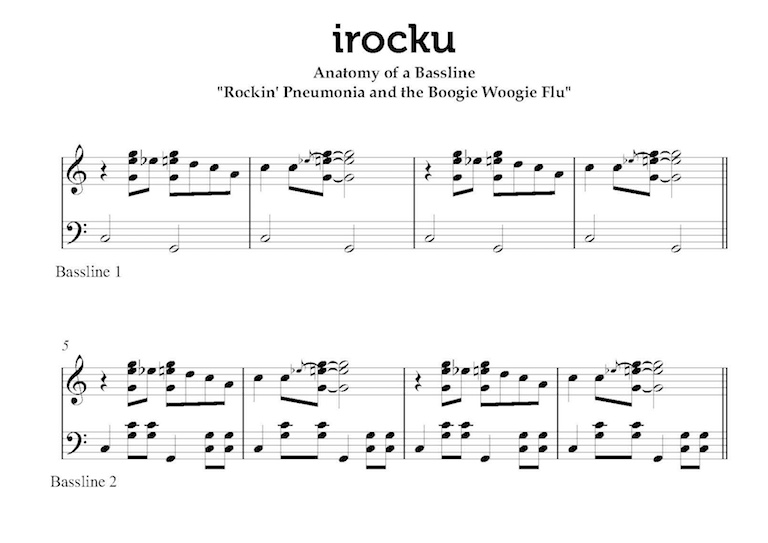 In this “Anatomy of a Bassline” post we explore how different artists covered “Rockin’ Pneumonia and the Boogie Woogie Flu” by simply changing the bass line while still maintaining the iconic syncopated New Orleans’ melody line. The song is a very simple 8 bar progression with only two chords – the I chord and the V chord. The melody begins on an off-beat syncopation and ends anticipating the third beat of the two bar phrase. The combination of these two syncopations is immediately recognizable as a “New Orleans” phrasing. For the IROCKU “Rockin’ Pneumonia and the Boogie Woogie Flu” piano lesson we opted for the bass line used by Professor Longhair in his 1974 version of the song. In this post we’ll show alternative approaches to the left-hand bass line with progressively increasing levels of difficulty exploring how different bass lines were used by the artists who have covered this iconic rhythm and blues song.

The first Bassline (1) in the chart is made of half-notes all played on the beat. Each note alternates between the root and fifth of the chord.  This simple ‘downbeat’ bass line helps to accentuate the syncopated right hand. This is similar to how it’s played on the version recorded on Johnny Rivers’ hit single recorded in 1972. The famed piano licks on this recording were played by monster piano player, Larry Knechtel, of the Wrecking Crew. This bass line is a good approach if you play in a band. Staying on the beat and just playing the root and fifth will keep you from getting in the way of what the bass player or drummer is doing.

The second Bassline (2) in the chart is a boogie woogie/stride pattern . It’s derived from the first bass line alternating between the root and the fifth of the chord on the first and third beat while interjecting eighth-note dyads on the off-beats.  This provides a boogie like bounce to the piece while preserving the clear distinction between the syncopated melody line and the downbeat bass notes. This is how it’s played on the versions by Huey ‘Piano’ Smith, Dr. John and Jerry Lee Lewis. James Booker also uses this as the foundation for the bass line on his brilliant version of the song but replaces the quarter notes in the downbeats with two eighths and then some…

The third Bassline (3) in the chart is instantly recognizable as an essential New Orleans ingredient.  It begins on the downbeat and with an eighth-note anticipating the third beat. This is how Professor Longhair played it on his 1974 version recorded on the album “Rock n Roll Gumbo”.  This is also the version that we cover in the IROCKU lesson for “Rockin’ Pneumonia and the Boogie Woogie Flu”.

The fourth Bassline (4) in the chart is an adaptation of Bassline (3) that is only found on Aerosmith’s version of the song. In each alternating bar Aerosmith shifts the anticipated eighth-note from the third beat to the fourth beat of the measure. In doing so they respectfully pay homage to the New Orleans piano players who introduced the world to this great song while adding their own rock ‘n roll signature.

As you explore this great piano piece, experiment with the different bass lines, mixing and matching as Aerosmith to make the song your own. The Grateful Dead who are known for combining different melodic and rhythmic textures have done just this in their 1972 version of the song. Bassline (2) is played throughout the piece by Keith Godchaux on keyboard and Bob Weir on rhythm guitar while Phil Lesh improvises over the New Orleans Bassline (3).

Absolutely love the lessons. You have created a life changing, important service here for anyone who loves piano and wants to improve. I look forward to my lessons everyday and can't thank you enough for quality of the product you have created. It's far, far ahead of anyone else... I'm more than enjoying the lessons, I'm truly amazed at how great the product is. For years I've been trying to find a method of training that takes me where I'd like to go... Being able to jam with a band (like Chuck!). The whole product is very well put together from the different levels, the sheet music that accompanies them and the videos. It's perfect and I know it was a lot of work to pull it all together so thanks to you and all the members of the team. You're doing a great thing here. DanS
I'm enjoying the lessons very much. Starting up again after a number of years my main challenges have been getting the left and right hands to work independently of each other, especially with some of the more challenging rhythms in a lot of the songs. But, the suggestions in the videos are very helpful with this. I have a tendency to want to jump right ahead to level 7 right away and it's definitely better to work up to that level...I'm really very happy with everything. ChrisM