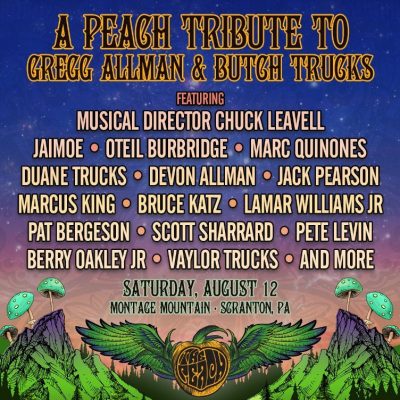 This year’s Peach Festival will honor the musical legacies of the late Gregg Allman and Butch Trucks with a special tribute set led by Chuck Leavell serving as musical director.

The tribute will take place on Saturday, August 12 on the day headlined by Widespread Panic and Gov’t Mule with special guest John Scofield.

Read more about The Peach Festival

I just downloaded the 'Chuck Leavell's Stride Blues' series. What a true joy. So much to work on – it should keep me going for a long, long time! This is exactly what I wanted to learn. Back to the Woods is an incredible work and is consummate artistry. The Stride series is awesome – it helps pianists with a guide to learning the style. Chuck has brought joy to us with his playing – everyone needs more joy in their life! What a great series! Congratulations! Lee B
Your site is the best thing that happened to piano! The lessons and everything are awesome! LeeofCal