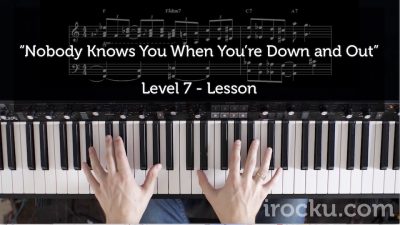 Eric Clapton first recorded “Nobody Knows You When You’re Down and Out”  in 1970 on the Derek and the Dominos debut album, ‘Layla and Other Assorted Love Songs’. With Clapton on lead guitar and Duane Allman filling in on slide guitar there wasn’t much space for Bobby Whitlock to cut loose on the keys. That all changed 22 years later when Clapton recorded an acoustic version of the song with Chuck Leavell on the piano. This week’s piano lesson combines some old style stride blues piano with right-hand rock and blues licks that read like an encyclopedia of modern rock piano.

“Nobody Knows You…” piano lesson

In 1992, Clapton recorded yet one more version of “Nobody Knows You When You’re Down and Out”  on his Grammy winning ‘Unplugged’ album. And in doing so, he called up another Allman Brother, irocku founder Chuck Leavell, to play keyboards. This time around, Clapton provided plenty of space for the keyboards and Chuck laid down one of his most memorable keyboard tracks.

This is not your typical blues piano lesson. “Nobody Knows You When You’re Down and Out” is based on an 8-bar progression and the lyrics tell a tale of hardship and bad luck; but the similarities to the blues end there. The chord structure doesn’t follow a standard blues progression and improvising over the progression using a single blues scale just won’t work here.  Chuck solos over each chord change adding both complex rhythmic and harmonic textures. The keyboard solo on “Nobody Knows You When You’re Down and Out” (along with Chuck’s solos on two other songs from the Clapton ‘Unplugged’ album, “Alberta” and “Old Love”) is one of Chuck’s finest pieces of work.  Have fun with it!!!

I am very excited to delve deep into these lessons. I have been playing your solos for about 20 years and have always been "missing" a few notes. Although, I am steeped in the blues, the blues and jazz books don't really cover the classic rock songs in the way that they infuse blues, rock and gospel . I'm very excited to hone these solos and get back out there to perform them. Frank S
Great stuff, thank you….You have a great website, fine offers and perfect lessons! DiderikG