Here’s a video of Joe Cocker singing Dave Mason’s Traffic classic, “Feelin Alright”.  The piano intro to this song is one of rock’s most recognized piano licks, originally played by Artie Butler on Joe Cocker’s debut album With a Little Help from My Friends.  This “Feelin Alright” video features session and stage keyboardist, Mark Alexander. 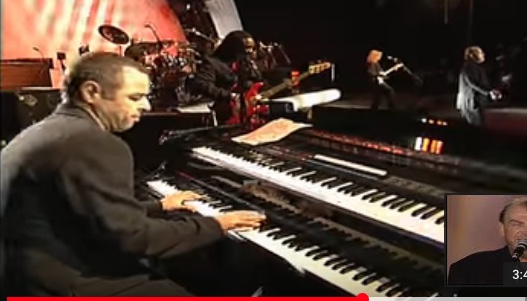 Joe Cocker was known for surrounding himself with the top musicians in the music industry. Guitar greats Jimmy Page, Jeff Beck and Eric Clapton all made their way into a Cocker session. Saxophone phenom, Bobby Keys notoriously known for his work with the Rolling Stones shared his chops on the “Mad Dogs and Englishmen” (1970) live and “Jamaica Say You Will” (1975) albums. Clarence Clemens played sax on “Unchain My Heart” (1987). But for vocalists and keyboard players, landing a gig with Joe Cocker was a right of passage into rock stardom and a pathway to the rock ‘n roll hall of fame.  Legendary singers, Claudia Linnear, Rita Coolidge, Bonnie Bramlett, Merry Clayton, Robert Palmer, Jimmy Cliff, Phoebe Snow, Bryan Adams, Tata Vega and Vaneese Thomas… all sang backing vocals for Joe Cocker.

Even more impressive than Joe Cocker’s list of backing singers, though, is the list of keyboardists who played with him.  Ask your average rock fan who played keyboards for Joe Cocker and most will say Chris Stainton or Leon Russell.  Granted Chris Stainton played Woodstock with Cocker and sat in on more studio albums with him than any other keyboardist and Leon Russell did direct the infamous “Mad Dogs & Englishmen” tour. But in four decades of recording and touring piano players Dr. John, Allen Toussaint, Benmont Tench, Ian McLagan, Steve Winwood, Billy Preston, Richard Tee, Donny Hathaway, Artie Butler, Greg Philingames, and Nicky Hopkins all made it into the studio or on the road with Joe Cocker. These are the best of the best pianists in rock and roll.

Mark Alexander is not a household name to the average rock fan but like all the other keyboardists who recorded or toured with Cocker, Mark Alexander is a monster player. He’s worked with Little Steven, The E Street Band, Darlene Love, The Rascals, and has played keys on a number of Broadway shows, including Billy Joel’s “Movin Out”. You hear of musicians having perfect pitch; where they can recognize musical notes the way the average person sees colors. But the more elusive talent is perfect rhythm. In Mark’s piano intro to “Feelin’ Alright”, he locks down the tempo which drives the complete performance.  Mark’s rhythm is exact- he is the keyboardist, the drummer and the bass player all in one. At IROCKU we have been fortunate that Mark has been one of our musical advisors since the website’s inception. If you are interested in taking a private lesson with Mark please click here:

Here’s the rundown of keyboardists who played with Joe Cocker.

Chuck-I was very surprised at how much your lessons offer…best content I’ve ever seen….it is obvious to me that whomever is involved has made an extreme effort to ensure the success of your students…I’m very excited to work on the material…!!! TomS
Wanted to tell you I had the lesson with Bruce (Katz) yesterday and it was great.  He’s an amazing piano player and was super helpful.   I can tell he really wants to help his students – cool dude all around.  Thanks for bringing such great teachers to you iRocku platform DS