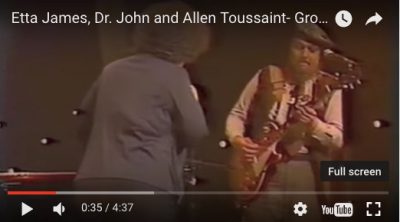 Dr. John began his musical career in the 50’s playing guitar because he didn’t believe he could make a living playing piano. In the 60s, his left ring finger was shot off in a bar brawl and he switched to piano as his main instrument. Here’s a rare video of him playing guitar. Unfortunate for Dr. John, but fortunate for the generations of piano players to come.

The “Chuck Leavell’s Stride Blues” rock essentials series is great…the approach to pentatonic and blues scales is really useful. Ariel T
irocku has helped take a big step forward as piano student. I am very impressed with your lessons, I learn more than ever. Hans R